Letting black do its magic

Recently, I took on clients who found me through friendly connections. That’s often how I come to work for people and I have to say, for me, it’s the best way.
The best way because new prospective clients have usually seen my efforts first hand and have a sense from their friends how I work and what the experience was like for them — which is always a great experience for all involved or I wouldn’t keep getting hired. 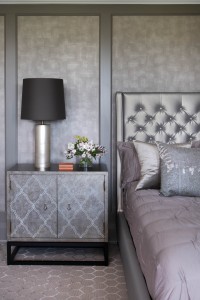 My first meeting with my new clients took place in their well-appointed apartment suite which sits in a busy partb of town high in the air overlooking the twist-and-turns of the tree-lined lanes of always rosy Rosedale. I suggested a few ideas of how we could turn their somewhat dated and drab pied a terre into something really wonderful.

As a designer, when I’m confronted with a dreary space lacking in character and style, I always arm myself with black. Black is beautiful. It can turn drab and dowdy into charming and chic in a single stroke of a brush, lashing of fabric or framing of art.

The biggest design mistake anyone can make is not using black in a room. I never allow my clients not to. However, where I wanted to use black in this instance was met with gasps of astonishment and shock not dissimilar to if I had suggested attending a Mother’s Day celebrations at an orphanage.

Next to the living room sits a rather delightful conservatory that looks north over the aforementioned lush enclave. I wanted to replace the mousy brown of the window frames with black. As well, I wanted to coat the dated brassiness of the cocktail table in living in the dark designer favourite, as it would instantly elevate both the room and piece of furniture into something so much more. 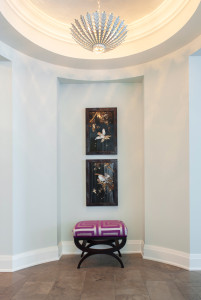 After much talk and handholding, my clients agreed to the window frames but not the table, which is a real shame because it is a great piece with wonderful lines that’s now lost in the dull 90’s “brassosphere”. I can only suggest and hope at the end of the day, it’s not my house.

In another instance where I suggested using black to clients I was met with cheers and adulation. I wanted to paint all the doors in their stately apartment in glossy darkness. It turned an already great home into something approaching interior design nirvana. Such a simple thing but made a huge difference in setting the tone of luxurious
and stylish living.

If, like some, you are hesitant about using black in your home don’t be afraid to start small — framing pictures, a side table here, a lamp there, coating woodwork or moldings and then graduate to doors and perhaps whole rooms.

Start with a powder roomfor example or entryway you’ll be surprised at the impact and glamorous fun you will create. Be fearless and remember, black is beautiful!